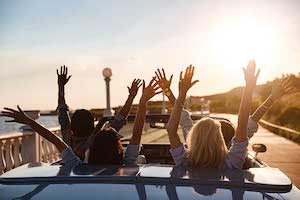 Tragedy stuck on the evening of January 7, 2020, when a vehicle full of teens was involved in a single-vehicle accident in San Diego. The Mercury News shared details regarding the crash that left one teen dead and five others injured. The source said that the vehicle hit a guardrail while heading west on Highway 905 just east of Interstate 5 when it crashed.

The vehicle being driven was a Chrysler 300, which only seats five, including the driver, but was occupied by six individuals between the ages of 15 to 19. The driver was ejected as a result of the impact and was declared dead at the scene. Two of the teens had to be extricated after they became trapped inside the vehicle and were transported to an area hospital with the remaining three to receive treatment for the injuries they suffered.

Although the age of the driver was not released, the source went on to highlight something very important that all teen drivers and their parents should be aware of. In the state of California, drivers who are under the age of 18 who receive their license are required to drive with an adult aged 25 or older in the vehicle with them during their first year of driving. Driving can be extremely dangerous for a teen driver to do, especially when they fail to abide by the law and get in the practice they need to operate a vehicle safely.

What are Some Common Factors That Contribute to Teen Car Crashes?

Although the news source failed to disclose the reason for why the accident transpired, there are a number of potential reasons. You see, teen drivers between the ages of 16-19 are already at a higher risk of engaging in a motor vehicle accident more than any other age group, says the Centers for Disease Control and Prevention (CDC). In 2017, 2,364 teens between these ages were killed in a collision and an estimated 300,000 received treatment in an emergency room for the injuries they suffered in a crash.

While inexperience is one of the more obvious reasons why teenagers are engaging in accidents more often than anyone else, there are some other common factors that have been known to contribute to the high rate of teen accidents as well. These include:

When is a Teen Between the Ages of 16-19 More at Risk of Engaging in a Crash?

The CDC says that teens who are more likely to engage in a crash include:

Was Your Teen Recently Involved in an Accident While Riding as a Passenger in Another Vehicle?

If your teen suffered injuries in an accident in San Diego, CA and you are looking for ways to recover the compensation he/she needs to cover the various costs associated with the medical treatment they need, contact San Diego, CA car accident attorney Bruce S. Meth. If your teen is under the age of 18, you may be able to bring a claim against the driver in an effort to recover the money you and your family need to make up for your losses.

You Can Reach The Law Offices of Bruce S. Meth at